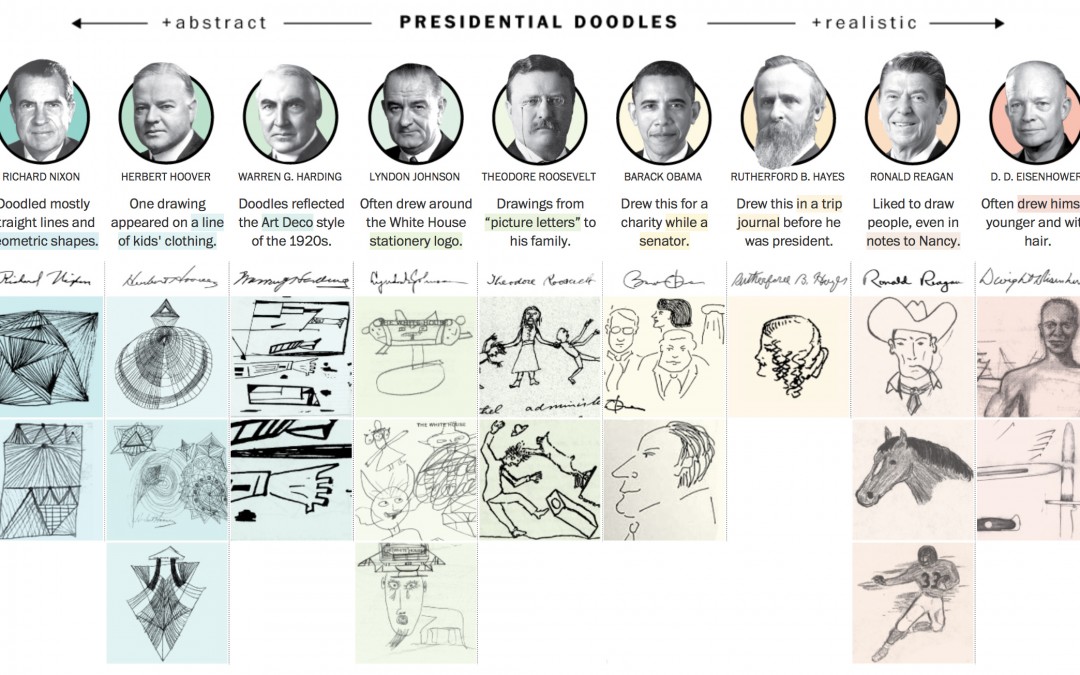 When you put pen to paper without any specific purpose or meaning, what comes out of it?

Apparently there is a huge fascination with the doodling practices of American presidents, trying to decipher things unknown by analyzing how and what they jotted down. Washington Post had their cartoonists critique the various examples of presidential doodles; and there is even a book compiling 200 years worth of doodles from the Oval Office.

My most productive doodling days were in high school and university when instead of taking notes I would fight off sleep and boredom by doodling in the corner of my notebook. Thinking back it seems I went through the entire spectrum of styles, including ones represented in the presidential doodle examples. From simple connecting lines and geometrical forms to morbid images of jumping off cliffs (that must have been in a class I really disliked) to caricatures and realistic portraits (mainly of teachers). My best friend in high school was so great at doodling I secretly planned to compile her little corner drawings into an art book. Unfortunately moving to a different country indefinitely halted that plan…

I was surprised to see that one of the commenters on presidential doodles said Nixon’s geometrical lines looked scary. I would have thought that this style was among the most common ones, having myself made plenty of similar marks, especially while talking on the phone.

Harding’s doodle is very interesting because to me it shows acute awareness of his contemporary art movements. In just this one image there is a mixture of strong black lines of the art deco style, the geometrical forms of futurism and the dark humor of dadaism. I think it’s fascinating, he must have been either actively interested in art or very visually attentive. 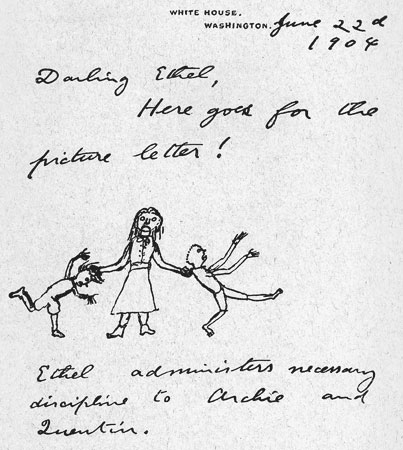 Roosevelt’s picture letters are a little creepy, nevertheless they definitely have the most depth in this bunch. They not only tell a story but also represent mood and movement, which to me shows that he had a good visual memory and some practice in drawing. 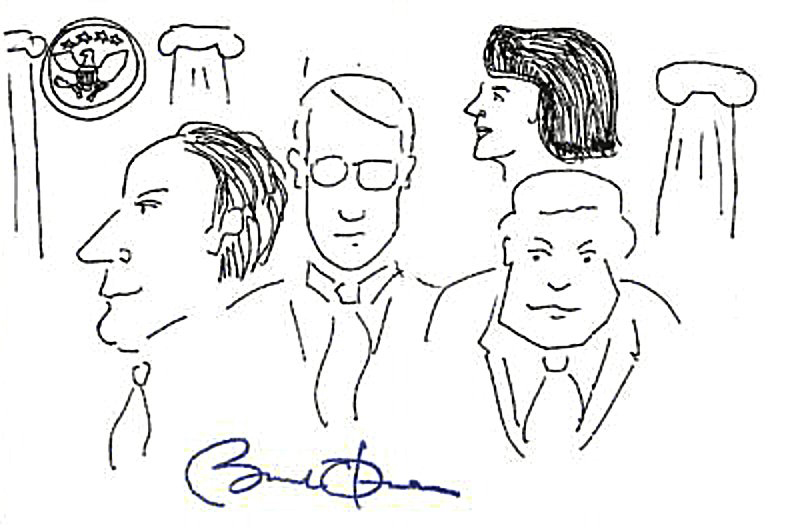 Obama’s doodle is the most fascinating of the bunch for me. Not because he drew recognizable caricatures of politicians and named them as pillars of the state without uttering a single word. Clearly, the man has some skills; even his signature is quite artistic. What interests me most is his drawing style: the short unconnected lines that make a whole. This is the exact opposite of the way I draw so I find it very intriguing and would like to see his line work in action.

While I was compiling this post it occurred to me that I haven’t produced any doodles in quite a while. Maybe it’s because I avoid phone calls like the plague. Or perhaps because my days are no longer filled with idle listening to droning lectures. Or because my hand gets enough exercise drawing with a purpose, I don’t know…

How about you, why do you doodle (or don’t) and what is your go-to style? Leave a comment below or share a picture.